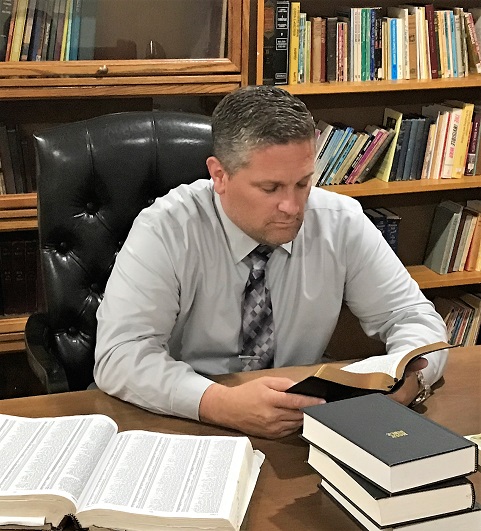 The pastor was born, raised, and continues to live in Polk County, North Carolina. His family includes his wife, Michelle, and four sons: Austin, Jacob, Noah, and Seth. Currently and for the last 21 years Pastor Jackson has been the pastor of Landrum Independent Baptist Church (LIBC) in Landrum, South Carolina.

Pastor Jackson served in the United States Army, during Operation Desert Storm and The War on Terrorism eras, and as a Chaplain School Instructor. Along with his service to our great country, he also started Military Bible Missions; which with the support of God's people, publish a special KJV Bible honoring all branches of the Armed Forces. This Bible is given to Soldiers, not only to active service men and women, but also to veterans. Pastor Jackson has a heart for the Armed Forces, but also for the lost, downtrodden, and seemingly forgotten members of society; this burden has led him into the jails, prisons, and nursing homes where he, along with his church, minister to those in need.

Having graduated from six years of Bible College, Pastor Jackson had a desire to see a school that would train men and women in the Word of God, without taking them from their local church, and would provide doctrinally sound teaching in these corrupt times. In August 2015, this desire and long-time prayer was answered with the commencement of LIBC Baptist Bible College's first semester. LIBC Baptist Bible College is a Satellite of Temple Baptist Bible College. 2 Timothy 2:2 states, "And the things that thou hast heard of me among many witnesses, the same commit thou to faithful men, who shall be able to teach others also."

In closing, we thank God for our Pastor and his family. We pray that God will bless and keep him and his family, hide him behind the cross, and give him the words that we need to hear.